We are a leading provider of Electrical Solutions 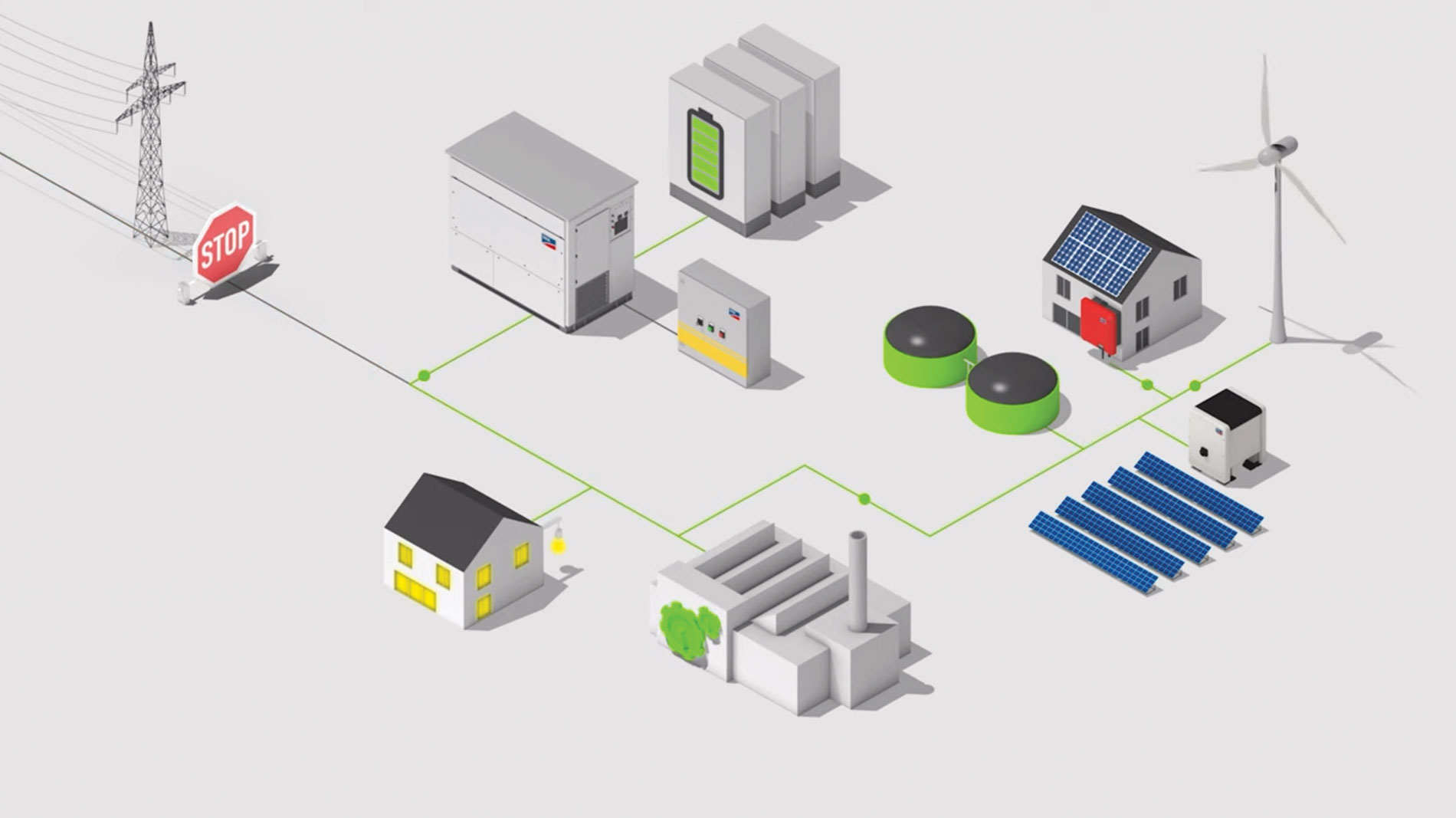 We’ve all read about the large quantity of new renewable energy and storage resources we’ll need to add to the nation’s grid to achieve the goal of 100% climate-friendly energy generation. Getting those projects designed, approved and built will be a heavy lift, especially considering aggressive state and national timelines for reaching carbon-reduction targets. But new supporting technologies are also needed to ensure new wind and solar arrays remain compatible with traditional turbine-based generators as their numbers scale up. This includes interconnection technologies that allow green generation resources to carry more of the grid’s load on their own.

According to the U.S. Energy Information Administration (EIA), renewables accounted for about 20.1% of total U.S. electricity generation in 2021. President Joe Biden has set a target for the United States to boost that figure to 80% by 2030, which would require a substantial ramp-up in solar and wind adoption over the next eight years. While this appears to be a potentially unrealistic goal today, the EIA and the Federal Energy Regulatory Commission have projected that getting to 50% by 2030 is possible, given current growth rates.

Even at the 50% level though, grid operations could start to become challenging, thanks to the ways electricity generated by solar and wind resources—and provided by battery-based storage—differs from traditional fossil fuel and nuclear-based turbine systems. Turbines generate alternating current, with its familiar oscillating sine-wave pattern. Solar, wind and storage generate direct current at an essentially continuous level, which needs to be converted to AC using an inverter at its point of interconnection to the grid.

Today, utility-scale solar, wind and storage installations use grid-following (GFL) inverters, which match the voltage and frequency of the current they’re injecting into the grid to the conditions set by the synchronous turbine generators on the same network. This means they can’t restart the grid on their own in the case of an outage. Instead, they must wait for a traditional turbine generator to fire back up and re-establish frequency and voltage before they can reconnect.

Traditional turbines also offer a couple other benefits that support grid health, beyond this “black-start” capability. First, there’s the inertia inherent in how this equipment operates—in other words, turbines don’t just stop spinning all at once as they start to fail. Instead, the weight of the spinning turbine can keep the machinery operating as it begins to slow down, providing a few valuable milliseconds of continued generation during which other resources can be switched into service.

Second is the fact that each turbine added onto a network helps strengthen and expand the reach of the grid’s frequency and voltage to connected loads farther out into a utility’s service territory. In utility terms, this is called increasing the grid’s short-circuit ratio (SCR) in that area.

GFL inverters offer neither of these important capabilities. They create binary, on/off interconnections with the transmission system, with none of the carry-through inertia can support. And, since they provide no voltage or frequency support on their own, these resources can make low-SCR situations worse at the point where they’re added. Solar and wind resources are quite often located at a transmission system’s edge, where low SCRs are often already a problem. This issue can raise red flags for transmission planners tasked with evaluating connection proposals from renewable project developers.

“If you’re at the edge of the system, it’s harder for the generator to regulate the [grid] system—the grid-following inverters don’t provide support,” said Yashen Lin, a senior researcher with the U.S. Department of Energy’s National Renewable Energy Laboratory (NREL). While this isn’t a big problem at low levels of renewable penetration, as these resources scale up, “you lose some of the ability to regulate the system, so we need the inverters to do more.”

This is why researchers and inverter manufacturers are turning to a technology already used in microgrids, which often pair renewables with natural gas or diesel generators. These grid-forming (GFM) inverters incorporate electronic controls that enable them to transform the DC power they receive to AC current in a way that mimics traditional turbine generators.

Lin is one of NREL’s leading experts on GFM inverters. He led a team with members of multiple national labs and universities that released a road map for the technology’s development in late 2020. The document lays out the steps required to move these products forward from their current use in island and microgrid applications to supporting continental-scale bulk-power systems over the next decade or so.

“We have many aggressive targets to get the system to 75% or 100% renewables, and if we’re going to meet them, we need the GFM inverter,” Lin said, describing some of the technical questions that need to be answered for such a broad deployment.

“If we have a lot of inverters working with synchronous generators, it’s not clear how the inverters would work,” he said. “We need standards to characterize how the inverter should behave during certain conditions, and we need to agree on what type of services we should get from the inverters—like, do they need to be able to black-start the system?”

Another team led by Wei Du, a senior research engineer at the Pacific Northwest National Laboratory, has been working to identify the answers to these questions. This year, the group published a model that characterizes how GFMs could affect large-scale transmission systems. In June 2022, the Western Electric Coordinating Council announced it had begun working with the model as it plans for greater renewable energy use through the transmission systems it oversees across 14 western states, two Canadian provinces and northern Baja, Mexico.

“In microgrids, you already see a lot of grid-forming inverters, and they’ve proved they’re very important in maintaining the stability of the system,” Du said, explaining just why a model like this is needed. “The bulk-power system is much more complicated than a small microgrid—it has different sources like sequencing machines, grid-following inverters and also, perhaps, high-voltage DC transmission and other devices. People can use the model we developed to study how the grid-forming inverters impact transmission systems through extensive simulation studies.”

Du added that his team found that GFM technology also offers advantages beyond simply making it easier to support more DC-based renewables—it could also improve the reliability of transmission operations beyond the levels now supported by turbine-based generation.

“For reaching the 100% renewable energy goal, we need to install massive amounts of GFM inverters, both on generating plants and on storage plants. The technology is ready for large-scale application today.”

“What we have seen is, as the penetration of GFM inverters gets higher and higher, the voltage and frequency stability is improved—it can even do a better job than a traditional synchronous machine,” he said.

SMA-America, the U.S. subsidiary of Germany’s SMA Solar Technology, is a leader in inverter technology at all scales, from residential panel and storage systems up to large utility installations. It’s also worked on the kind of microgrid and island-scale projects that represent an entry level for the GFM technology that will be needed to greatly expand inverter-based renewables on the nation’s bulk-power system. Daniel Duckwitz, the company’s grid services product manager, said large-scale GFM projects are being developed internationally, with three primary drivers:

“SCR and inertia are the two most important services for ensuring system stability,” Duckwitz said. “For reaching the 100% renewable energy goal, we need to install massive amounts of GFM inverters, both on generating plants and on storage plants. The technology is ready for large-scale application today.”

To help accelerate that kind of adoption, an important new research effort is underway, bringing together national labs, universities and inverter makers. The Universal Interoperability for Grid-Forming Inverters (UNIFI) Consortium, co-led by NREL, the University of Washington and the Electric Power Research Institute was launched in September 2021. The group has a five-year plan to build consensus on functional requirements for GFM inverters and to demonstrate next-generation power systems incorporating this equipment through field testing. According to NREL’s Lin, the goal is to develop the regulations, standards and core intellectual property needed to push the technology into the field.

Lin said he sees some similarities to where the inverter industry stood in the early days of solar photovoltaics, as the UL-1547 interconnection standard was being developed. This standard initially focused on emergency shut-off requirements and other essential safety issues. It has since been expanded to provide guidance on adding storage to solar systems and using combined solar and storage to provide electricity directly for on-site use, rather than just for feeding that power to the grid.

“I think this is a very important issue and we are making great progress, and I feel the UNIFI Consortium is an important step,” he said. “To get these techniques to wider deployment we need a lot of agreement. I’m excited that it’s gaining traction, and we need to keep working on it.”

Chuck Ross has covered building and energy technologies and electric-utility business issues for a range of industry publications and websites for more than 25 years. Contact him at chuck@chuck-ross.com.

We will send you information about our services